Khoresh Bademjun is the most often requested birthday dinner dish in our house.  And we have to call it by its Persian name since Emily, who loves it, could not bring herself to eat eggplant, but as long as we called it khoresh bademjun, it was delicious.  It takes a long time to prepare and make, but it is well worth it.  Once you try this, you will have a hard time going back to eggplant parmesan.

It can be made with beef or chicken, if you omit the meat step, the eggplant and tomato combination prepared this way is also delectable.  It can be served with rice or eaten spread on naan or other good bread..

Once the stew is assembled and cooking, prepare the rice (preferrably Persian rice, which is simmered then steamed, but any plain basmati preparation will work). We also always serve it with an accompaniment of torshi (pickled vegetables), for which gardiniera works well. 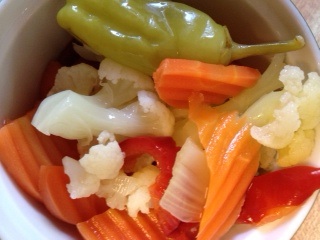 1 large eggplant, or the equivalent amount of small eggplants (from the garden)

1 can diced tomatoes or, as I used today, the equivalent amount of fresh tomatoes, peeled and chopped, about 2 large (from the garden)

Peel and slice the eggplant lengthwise about 1/4″ thick.  Place in a colander and sprinkle with kosher salt.  Place it in the sink and let it sit for at least 20 minutes.  Rinse and pat dry.

Place about 1/4″ of oil in a large non-stick skillet (one that has a cover), heat over medium high heat.  Once the oil is hot, working in batches, place eggplant in the oil.  Do not overcrowd.

Cook the eggplant til gold brown on both sides.  For this dish, over cooking the eggplant is better than undercooking it. 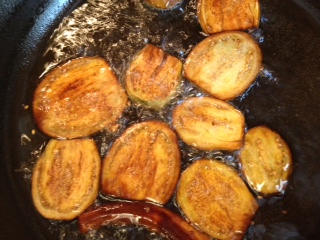 Remove from the pan and drain on paper towels.  Repeat until all eggplant is cooked; for 1 pound, it usually takes about 5 batches.

Drain the excess oil and wipe the pan.  Do not wash it, the remaining oil will be used to cook the meat.  You should have about 1 Tbsp of oil in the pan.  Heat the pan and add the chicken or beef and onions/leeks.

Brown on all sides – do not overcook.  After the meat is browned add turmeric and salt. Mix to combine. 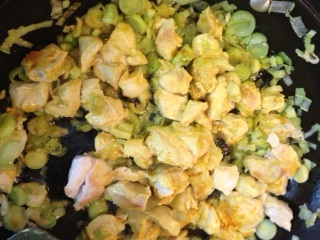 Assemble and cook the stew

Still using the same pan, spread the meat mixture evenly throughout the pan.  Add a layer of tomatoes.

Add the water then lay on the eggplant, overlapping the pieces to create a cover over the tomatoes and meat. 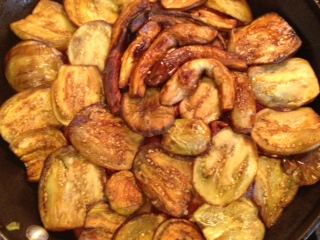 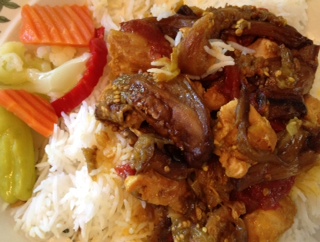