It has now been over a year since the start of my Challah Project. I have made challah nearly every week (of course not all were posted) and have learned better how to “read” my dough. I have learned that I like a fairly sticky dough before letting it go through it’s first rise. I have decided I do not like sourdough challah, although I love sourdough bread. I love stuffed challahs – whether sweet or savory. My son prefers simpler challah, fluffy without much added to it; surprisingly, he does NOT like chocolate chip challah – unless it is french toast. Yes, we have learned that just about any challah works well as french toast, even if we were not thrilled with it as a challah by itself. I have more to learn, so the project will continue a bit longer, and will then morph into a project on Jewish breads in general. 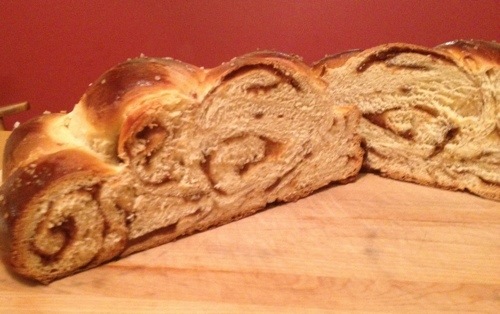