Of all my tomatoes, the cherry tomatoes have come in the best this year.  The only problem – they are eaten by my kids before I can do anything with them.  Although that is a ‘problem’ I won’t complain about. It did mean that I had to go buy tomatoes to use to make this dish.  I still used other ingredients from my garden – garlic, basil and parsley.

This is an adaptation of a recipe by Lidia Bastianich. Although I usually do not alter her recipes, I like the changes I made to this better than the original version, I think the garlic flavor is more intense and the overall dish more flavorful.

The leftovers also taste very good chilled from the fridge, which was a pleasant surprise.

Arrange a rack in the center of the oven, and heat to 350 degrees.

Toss the tomato halves in a large bowl with 3 tablespoons of the olive oil.

Sprinkle the bread crumbs, salt, and pepper flakes over the tomatoes; toss well to coat the tomatoes evenly.

Pour the tomatoes onto the parchment-lined sheet, and spread them apart in a single layer. Bake until the tomatoes are shriveled and lightly caramelized (but not dried out), about 25 to 35 minutes. 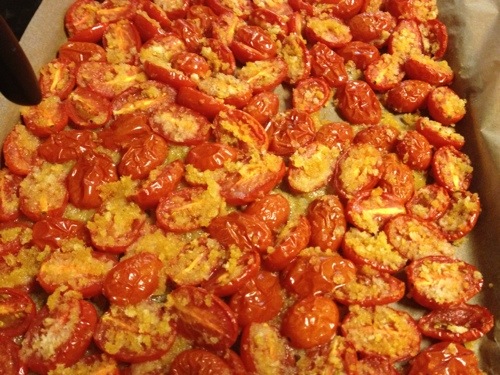 Meanwhile, fill the large pot with salted water, and heat to a rolling boil. When the tomatoes are nearly done, drop the pasta into the pot, stir, and return the water to a boil.

As soon as the pasta is cooking, pour the remaining olive oil into the big skillet, set it over medium- high heat, and scatter in the sliced garlic. Cook for a minute or two, until it is sizzling and lightly colored.

Stir in the chopped parsley, keep over low heat.

As soon as the tomatoes are done, remove them from the oven.

When the pasta is al dente, lift it from the water, drain for a moment, and drop it into a large pasta bowl. Toss pasta quickly with the garlic-and- parsley sauce and 1/2 cup pasta cooking water, then slide the baked tomatoes on top of the pasta.

Scatter the basil shreds all over, and toss everything together well, until the pasta is evenly dressed and the tomatoes are distributed throughout. Add the grated cheese and toss again.  Shred the ricotta all over the top of the pasta. Serve immediately and enjoy!