As with the rest of my late harvest, many of the butternut squash were attacked by bugs while I was in California in August. But I still ended up with a few squash to play with.  Today it is the Squash Bread recipe from Mollie Katzen’s Enchanted Broccoli Forest cookbook.  This is one of my go-to fun breads, I have been  making this bread as long as I have been growing butternut squash.

It is a yeast bread with a mix of whole wheat and white flour.  The squash gives it moisture and the molasses gives it earthiness. It is a great all-around bread:  as a PBJ, toasted with breakfast, with some apple-pear butter, you name it…

Based on Mollie Katzen’s Squash Bread

1 large butternut squash (from the garden)

A drop of molasses

Preheat the oven to 350F.  Cut the squash in half lengthwise, scoop out the seeds.   Put it is a roasting pan cut-side down.  Add about 1/2 inch of water.  Cook for 1 hour, until a knife stuck into the shell goes in easily.

Scoop out the meat and mash by hand or use a food processor until smooth.

Make the sponge:  Place the water in a large bowl.  Add the yeast and molasses. Beat in the flour.

Mix the following in a separate bowl:  the squash, molasses, butter, salt, cinnamon and cloves. Mix til well combined.

When it is room temperature, beat into the risen sponge. 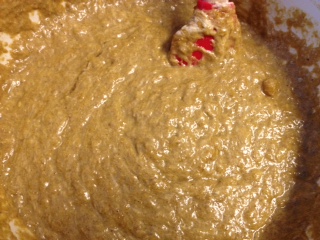 Punch down the dough. 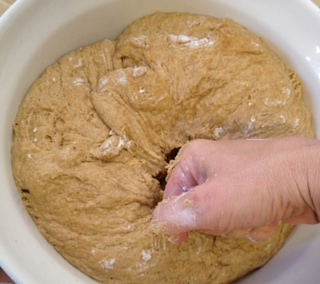 Knead on a floured surface. 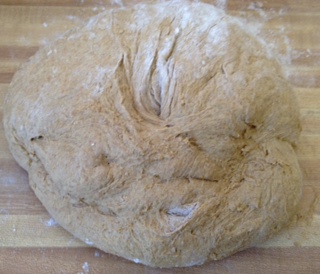 Divide the dough in half and place in 2 oiled loaf pans.

Bake for 40-45 minutes – until the loaves sound hollow when thumped.  Remove from pans and let cool at least 30 minutes before slicing.